Okey, I am going to try to explain the problem with gypsies in our beloved country – Bulgaria. Before I can do this, we need to look further back into history. Well, not so further back.

Where they came form in Bulgaria?

Looking back into history, you can see the genocide(not acknoledged by the world) against bulgarians in FYROM(Former Yugoslavian Republic of Macedonia) and Serbia. They have seized some portions of teritory, that were populated by native bulgarians and in order to hold this teritories, they needed to ethnically clean them. So they began torturing the people that recognized themselves as bulgarians on this teritory. This is in the years 1944-1960. Of course, they killed the intellectuals first in order to reduce the attempts for resistance. Mainly they targeted male people in the years between 12 and 60. Woman and children were just left to die from hunger or saved if they gave up their ethnic claims to be bulgarians.

Around the year 1960 the Soviet Union finally made their mind(both Bulgaria and Serbia were comunist countries depending from the USSR). They ordered Serbia to step back and stop the repressions against their “slavic brothers”. In response, Serbia opened the border with Bulgaria, so all peple that still feel themselves bulgarians can go to their country.

Well, it`s a sad win. A big number of bulgarian poets, scientists, singers and not to forget all the ordinary people have already died. It was estimated that around 25 000 bulgarians were able to come back, and the bulgarian population was estimated between 300 000 and 450 000 before the repressions.

Despite this, something came back. Something. Over 100 000 gypsies were forced by the Serbians to pack up and cross the border, pertending to be bulgarians. This gypsy wave was taken by my country.

What did we do with them under the comunism?

It depends. Gypsy things were a tribe(not something else – a tribe) of crafts. They were pretty useless due to industrialization. Noone needed their services in the high-tech 60s. But this was socialistic Bulgaria – everyone has to work(or else send to death…). Actually there was no death sentance in Bulgaria. There were two ways to send someone to death officially. The slowest and bad way was to send the guy to the camps in Belene(a small island between Bulgaria and Romania), where the people were in prison, forced to dig stones and build infrasructure. In average it took like 1-2 years before the guy dies from a sickness or a general exhaustion due ot the heavy work. The other way was the Uranium mines. As you might have alredy figured it out – yes, this were mines for Uranium, which is radioactive. Average rate for a prisoner there was to mine 1kg of Uranium before he dies from radiation poisoning. And this took like 2-3 months. So this is the how people were sent to death in Bulgaria. But we were speaking for something else…

Gypsies have to work. And so they were forced to join the army. The constructions army. Not a joke. Back in the socialistic times, we had an “Engineering Army”, which were military divisions. They were mainly building military strategic bridges, airports, bunkers and so on. And there was the part of this army, which was building regular buildings for the country`s needs. There went the gypsies. They were considered the worst possible builders. Ever. Believe me, I have lived in an apartment built by them. The first three floors were built by the regular enginnering army and they were perfect – hight: 2.75m, floor: 0.25m of concrete, walls: reinforced: concrete at 90 degrees from the floor. No holes, no mismatch of the panels. Sadly, I lived at the 5th floor. The 4th floor was only 2.40m high(missing 0.35m) so they compensated(!!!) on the 5th floor, making it 3.10m high. Well, I was happier than the guys on the 4th floor, but I had holes on the walls caused by the mismathicng pannels. Bacause the freakign pannels are 3m high(2.75+0.25). Not 3.35m. The gypsies have solved the hole problems of my apartment by using mud and grass(common for their houses at the time). Spectacular.

So they were crappy builders. Also crappy street cleaners. Also crappy… everything. They were not good at anything. On top of that, they refused to learn bulgarian. They also refused to live in bulgarian way. They insisted not to live inside the city, but next to it, in the woods. Which actually became a problem, because they were cutting trees and burning them. In large amounts. Huge amounts. 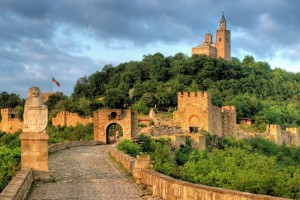 Somewhere in the 1970s, my people became tired of the gypsies. Really tired. Of their crap. Let me give you an example. A group of thousand or so gypsies thought it will be a good idea to settle their camp in Veliko Tarnovo, inside the city center, on top of an old castle, which dates to the third Bulgarian Empire. I will give you a picture. So, they went inside. This is a remaining church, from 12th century. 800 years ago. And they went to actually live inside it, remaking it as they think it will be better. The city happily got a general(yep, military shit all the way) who felt insulted by this action and ordered a full cleaning of the city center by his troops(around 10 000 soldires at the time). His exact orders are still remembered and discussed a lot. They were like: “This is a drill, go and clean the city area from anyone who doesn`t speak our language. Try not to kill them, but if you do, I will personally give you medals”. The historic castle was cleaned from gypsies in less than 60 minutes. It was unreal by the words of people who saw it. Planes throwing people with parachutes over the castle, helicopters delivering troops, tanks and heavy trucks bringing more troops, a lot of more troops marching into the ancient castle. And from inside – people with sticks. It was like people from the 12th century defending against an army from the 20th century.

So! Gypsies were forced to live inside the towns in normal buildings. Not like animals in the huts somewhere in the middle of the wood. Or in historic castles they do not actualy own. This was acomplished in the hard way. But in order to keep them under control, they were stacked into districts, usually in the part of the cities near the railroads. It was considered there it`s unpleasant to live(too noisy) and also if needed, military troops can be designated at ease(by the railroads). So gypsies were stacked into this ghettos. They still refused to learn proper bulgarian and live like normal people. But this was a start.

Gypsies recieved education. By force. They didn`t want to learn anything. So they were forced to go to school. They were so terrible at learning, that we created special schools for retarded people in their ghettos, where they can learn. For 8 years of education, they learned the same material which bulgarian kids learned in 2 years. Sad. Afterwards they were immediatelly accepted by the enginneering army(for male gypsies) or involved in cleaning the streets(for the female gypsies). It was not possible in general to use them for somethign else. Noone needed crappy buildings(we had good ones), noone needed people to clean the streets(we had machines to do that). But they needed to work. Something. And they couldn`t do anything else. Because they didn`t want to learn. I don`t know why.

Yes, there are execptions. There are gypsies that are professors. But I can count them. 5? 10? No more than ten… Seriously, if 10 people from 100 000 are actually able to learn and get the highest degree…this is 0.0001%. I don`t even want to comment it. By that time(1970s) Bulgaria is in top 10 of the educated countries. Despite the fact we have over 100 000 uneducated or low educated gypsies.

What happened afterwards. Well, it`s a common psyhology. Gypsies want, but gypsies cannot have, because the smart and educated people recieve more, the low educated or uneducated people recieve less. So they began stealing and increasing th rate of criminal events. In the 1980s it was common for a gypsie to steal. But they recieved a backfire. By the police, by the military. And soon by the community itself. Gypsy became a synonym for a thief, a liar or just someone who is not worth even the air he breaths.

I have heard a lot of stories about gypsies that were caught stealing and were beaten until they confess it. Of course after the confession they were sent to the uranium mines or to the prison camps. But what do you expect when you are stealing? In a highly military socialistic country? Maybe “well, okey, don`t steal next time from this military warehouse…”. Nop. Something more like “5 years in the uranium mines”. Happy if he could keep up 4 months before the radiation kicked in…

And then suddenly it was over. 1989, the cold war is over. The military people are slowly disappearing. The line that separates us from the gypsies slowly fades. Nobody was thinking about this at that time… big mistake.

(jump on next part…)